As a writer, I’m always looking for inspiration.  Fortunately, Mother Nature is a wonderful muse, especially when she presents us with creatures just as wondrous as any the most imaginative among us could invent!

Take for example, the Aye Aye, cutest critter in the animal kingdom.  OK…maybe not so cute.  In fact, I’d say it might be the ugliest animal on the planet, and the Aye Aye’s looks alone are pretty deserving of the title “weird”. 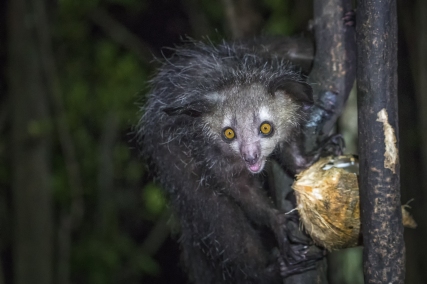 The Aye Aye uses echo-location to find prey, similar to bats and woodpeckers. They engage in what is called “percussive foraging”;  they knock on a piece of wood and evaluate the resulting sound for presence of prey (most often grubs and bugs).  Once they’ve located dinner, they gnaw a hole in the wood, then use their super-long middle finger to fish out the insects.  In some areas, the Aye Aye is considered an omen of pending death; if one points its middle finger at you, you are marked for a visit by the Grim Reaper.  Alternately, an Aye Aye might also sneak into your home and puncture your aorta with that long middle digit.

The Aye Aye can knock 8 times per second, which is many times faster than a speeding vacuum cleaner salesman.  I was surprised to find out that these gorgeous creatures are MUCH bigger than I had thought – they can grow up to three feet long, with a tail as long as their body!  It was thought to be extinct in 1933, but was rediscovered in 1957.  Perhaps it was just wishful thinking by the scientists from 1933?

Speaking of odd-looking, most of us have seen pictures of Anglerfish, with their toothy grins and a handy little fishing pole hanging out of their forehead.  However, I contend that the Barreleye Fish is the oddest looking sea creature around.  The fishy body is pretty typical, it’s the head that belongs in a Sci Fi movie:  it has barrel-shaped, tubular eyes which are enclosed in a transparent dome.  The eyes are typically focused upwards to detect prey above, but they can rotate them forward as well.  Our fishy friend also is the only vertebrate that uses mirrors as well as the lenses in its eyes for focusing.

And to put another nail in the weird coffin, the Barreleye has bio-luminescent organs, which are used to confuse predators by breaking up its silhouette in the water.  This is why Barreleye fishes often conduct raves in the deeps of the ocean. (It could happen!  Or was that just a dream I had?)

Another odd critter that’s all wet is an amphibian called the Axolotl.  I love saying their name:  Axolotl, axolotl, axolotl.  Just rolls off the tongue, doesn’t it?  These salamanders, also known as “Mexican walking fish”, are closed to being extinct in the wild, but they are bred widely and kept as exotic pets.  They are “neotonous” (which means that the adult retains juvenile features); in the case of Axolotls, they never form lungs, instead keeping their gills (which are on the *outside* of their bodies) and continuing to live an aquatic life. 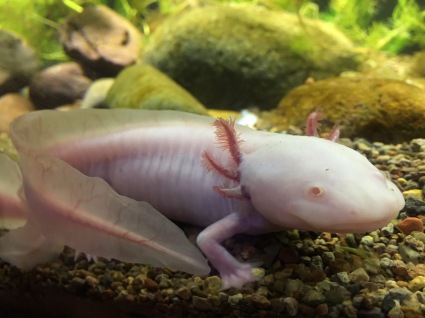 The coolest thing about the Axolotl is their ability to regenerate: they can re-grow many parts of their body, including some parts of their brain!  I’m thinking that regrowing parts of the brain might be helpful for those of us who may have done a little much partying in college…

Finally, what could be stranger than a semi-aquatic, egg-laying mammal with a duck’s bill, a beaver’s tail, otter’s feet, and a venemous spike on it’s hind foot?  The Platypus (also known as the Duck-billed Platypus) is so odd that when it was first discovered in 1799, scientists thought the animal was an elaborate hoax.

Similar to dolphins and the echidna (also called the “spiny anteater”), the Platypus has electro-receptors in its head, which it uses to detect electric fields generated by the muscle contractions of its prey.  Hm….wondering if we could make a horror movie starring a Platypus?  The tagline could be “Just. Don’t.  Move.”

Do you have a favorite oddball-life creature?  (And by the way, brothers and sisters don’t count…)

4 thoughts on “Finding Inspiration in the Weird”