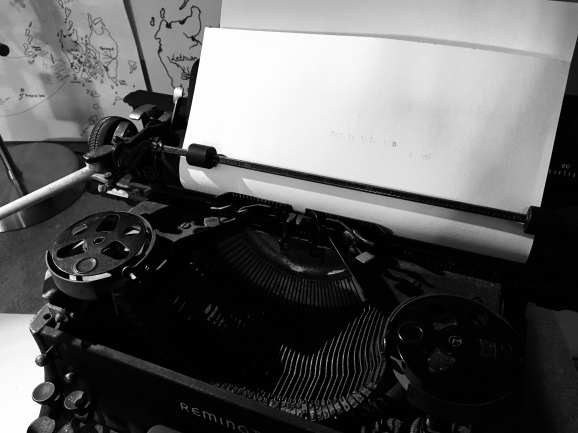 Have you ever had one of those dreams where you are supposed to be doing something, but you discover that you’ve completely forgotten how to do it?  I had a lot of marching band dreams like that: I’m in the middle of the field with the rest of the band, and I’m not even sure how to hold a french horn, much less play it.  Well, my husband taught me poker a few years ago, and it felt pretty much exactly like that.  And now that I’m finally pursuing my dream of becoming a novelist, I’m finding myself in familiar territory.

First, you learn a few basic rules.  Low cards are bad.  High cards are good.  Here is how you construct a sentence.  Verbs and nouns have to agree.

And that’s fine, because you’re a beginner.  But at the same time, you can see all of the nuance that goes into mastering that particular thing you really want to do, and you want to have mastered it yesterday.  When I was a novice poker player, I could see that things like table position, bluffing, raising and re-raising were all great devices, but I had no idea how to use them.  In writing, we hear over and over (and over) again “Show, don’t tell.”  Easily said, not as easily done.  And then there is plotting a story so that it’s exciting.  And making your characters interesting and relatable.  And knowing just how much description to put into your scenes so that your readers get a real feel for the story without being bogged down and having them skip to the next paragraph.

After a while, a funny thing happened with my poker sessions:  I found I no longer had to think about where I was sitting at the table to decide which hands were playable.  I’d done it enough that it had become a habit.  I now have a good sense for when to raise, when to fold, and when to steal.  And I got there by taking one piece at a time, working with it until I felt comfortable, then moving on to experiment with the next skill.

Photo by Pixabay on Pexels.com

And so it is with my writing.  I have my degree in Writing Arts, but that was thirty years ago, and believe me, you forget a LOT in thirty years!  I still struggle with “Show, don’t tell.”  I’ve read so many blog posts and books about writing, and as I edit my first novel, I’m hoping the same strategy I used in poker will work just as well with my writing.  For each editing pass, I choose a different thing to focus on, whether it’s making sure my characters have distinct voices or shortening sentences to create a feeling of suspense and excitement.  And by the time I’m done editing this novel, I’m hoping that the seven-plus years I’ve taken to write and edit this one will make Book Two of my trilogy a bit like qualifying to play the World Series of Poker.

I’ll never be a good enough poker player to win the World Series, but I do hope that one day my writing skills will be refined enough that I’ll have fans looking forward to the next installment of the adventure as much as I do.  Until then, thank you for joining me on this journey!